This spring, Davis started playing baseball. At the six and under level (6U), it’s coach-pitch. He did pretty well, and we saw improvements in his fielding from that first practice to the last game this past Saturday (May 22d). Hitting wise, he did awesome, going seven for eight in the first half of the season. He hit a slump, but rebounded for the last two games.

To see more photos, including a couple from the game, check out the rest of the set.

The Grand Prairie AirHogs are a new minor league team in the Dallas/Fort Worth metroplex, and we have some footage from a recent press conference:

The AirHogs season begins in May, and I’m looking forward to taking in a game or two this year.

I was a little miffed to learn the Rangers offer a downloadable calendar for the season, only as a comma-separated .csv file. This is fine and dandy if you’re running Outlook, as apparently the Rangers front office does, but it’s not so good if you’re one of the millions of people–and trust me, there are millions–not running Outlook.

The .ics calendars I found online weren’t quite up to my expectations, either. I ended up taking one and heavily modifying it, notably adding all of the away dates, since this particular one focused only on home games. You can download the calendar by clicking on the link below:

Simply unzip (decompress) the downloaded file, and follow your calendar of choice’s method for importing a calendar. The .ics format is an open standard, so pretty much any modern calendar app–yes, including Outlook–will read it. 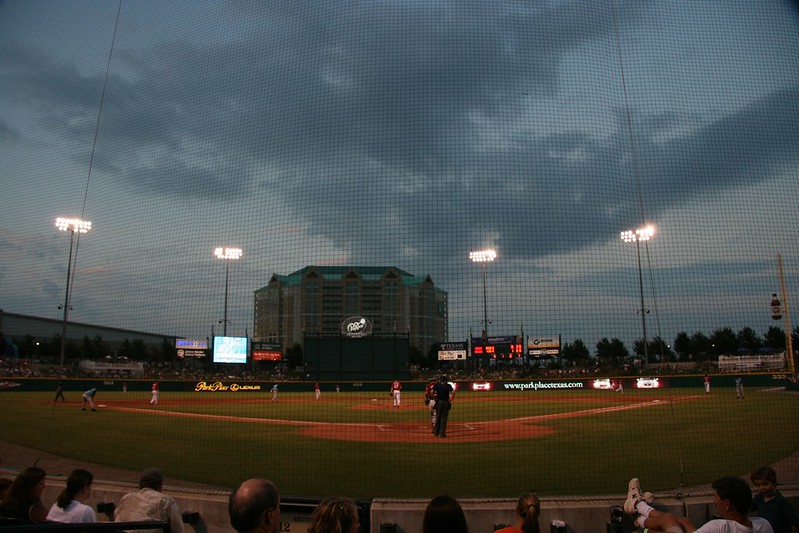 So my “last hurrah” before foot surgery was an outing to the ballpark in Frisco, home of the AA RoughRiders. It’s a nice park, and there’s not really a bad seat in the house.

Fortunately for us, we had really great seats, thanks to a church member who passed on six Founders’ tickets to Nathan, who kindly invited my wife and I to attend. Also along for the outing was Nathan’s wife Kim, perennial pal Brent, and Brent’s baseball-loving daughter, Kelsey.

We had a great time taking advantage of the all-you-can eat and drink benefit that came with Founders’ tickets, so much so that we missed the first inning, and the only scoring the game would see! The game may have been “boring” from the lack-of-scoring perspective, but I had a great time being out at a baseball game with my wife and great friends, and took some photos to boot.

Red Sox ace Curt Schilling is blogging.
(And for all the geeks, he’s using WordPress.)

Ameriquest Field is no more. Long live Rangers Ballpark in Arlington!
Personally, I could have done without the addition of “Rangers” to the original name for the park, but I can live with it. I never cared for the corporatization of The Ballpark’s name; why would you rush to rename your ball field when it has such a classic name as “The Ballpark at Arlington”? I pretty much refused to dignify the corporate name by speaking it, and have continued, lo these many years, to simply refer to it as “The Ballpark”. And now it’s “The Ballpark”–only with “Rangers” in there, too–once again.
Best of all, that stupid bell in the left field mid deck is gone, gone, gone!

Tom’s thoughts on the National Anthem mirror my own.

The missus can regale you with many a tale of Super Bowl, college bowl, NASCAR, baseball, hockey, and other sports viewing wherein I severely critique the anthem singing because they fail in one of the ways Tom speaks of.

(Or you’re just the flavor of the month, since we all know popularity doesn’t necessarily reflect impressive skill.)
(We do know that, right?)

The missus and I have been talking about taking the little phisch to some baseball games this season over at our local high school. It’s within walking distance, and right now, as the season’s beginning, the temperatures are still cool.

I pulled up the varsity schedule, and entered all of the home dates in to a new calendar in iCal. I then exported the calendar, in .ics format, and am making it available for anyone in Flower Mound who wishes to follow the Marauders at home in 2007.

Again, this is the home schedule only, and your calendar program should support the .ics format (which pretty much any modern calendar app does).

Three days after seeing Michael Young get his 200th hit of the 2006 season, Brent and I were back at the Ballpark in Arlington. This time, we were about 23 rows up behind home plate. I didn’t take a lot of shots, because the net behind the plate gets in the way. I’ve let myself get way too far behind on processing and uploading photos, so I’m making a concerted effort over the next few days to get caught up.

Back in September, thanks to a generous church member, Brent received four tickets to the Rangers game on the 16th. Four primo tickets, sixth row, first base line, just to the right of first. It was the closest any of us had ever sat at a major league baseball game, and Brent and I were way excited. It was the sort of opportunity that makes me pine for a digital SLR with a telephoto lens or two.

The highlight of the evening–besides the Rangers winning, that is–was seeing Michael Young collect his 200th hit of the season. I’ve uploaded a photo set to my Flickr account.