In January 1990, the first week of the semester at LSU, my best friend, on his way home from a night class, was hit by a drunk driver. Twenty-four hours later, the head trauma Brett had sustained in the incident was too great for him to overcome. With zero brain activity being registered, his parents made the difficult decision to end the life support being provided by medical equipment, and would go on to bury the second of their two children, both killed by drunk drivers.

Brett and I met our freshman semester in August 1988, in AFROTC. We were assigned to the same flight, and along with John, formed a quick but deep bond over our love of country, LSU, and hard rock/heavy metal music. John and I, along with our friend Drew, were three of Brett’s pallbearers. AFROTC Detachment 310  led the way, with participation from our Army brethren across the hall, in giving Brett full military honors, inasmuch as we were able to for a bunch of college kids. After the funeral, John and I stood in Brett’s bedroom at his parents’ house in Abbeville, and one of the memories John brought up was how Brett’s left foot was always pounding out the bass beat when he was driving. Brett was a drummer, and it never stopped. Not when he was driving, not when he was sitting in a booth at Pizza Hut after that week’s marching on the Parade Grounds, not when he was sitting and studying.

John would drop out of ROTC before I did. We gradually lost touch, connecting once or twice through the years. Drew is still a good friend; until three years ago, we had spent the previous 15 years living in the same neighborhood, two short blocks from one another. We have literally watched one another’s kids grow up. And there was a fifth member in all of this, and that’s Liz.

Liz was the flight commander for me, Brett, and John that first semester in AFROTC. She became a friend, a big sister none of us had ever had. Brett’s brother had been older, and John and I both had younger siblings. Even as we each went our own way, Liz remained a common star we orbited around. One of the highlights, at least for me, of our family’s annual trips since 2012 to Horn Creek in Colorado, is to take one day to go meet up with Liz, who lives in Colorado Springs with her family. It was Liz who, after I fell down a mountain in the Garden of the Gods in 2016, sat with me at an urgent care in Colorado Springs, waiting until I could get x-rayed and see how broken my arm was, so my wife could take our boys to get lunch. We may be able to only see one another once a year, if that, but there’s Facebook for keeping up with one another, and calls and texting.

One such text came a couple of weeks ago. She was working on a spring cleaning of the house, and found a bunch of Brett’s CDs she’d taken from his apartment. His parents had let those of us who wanted to take things to remember Brett by. I kept his Fudpucker’s t-shirt, acquired during our base visit to Eglin AFB just the semester prior. Liz chose his music. But now they needed to go, and she wanted to know if Drew or I wanted them. Drew passed, but I accepted. Guess what arrived today? 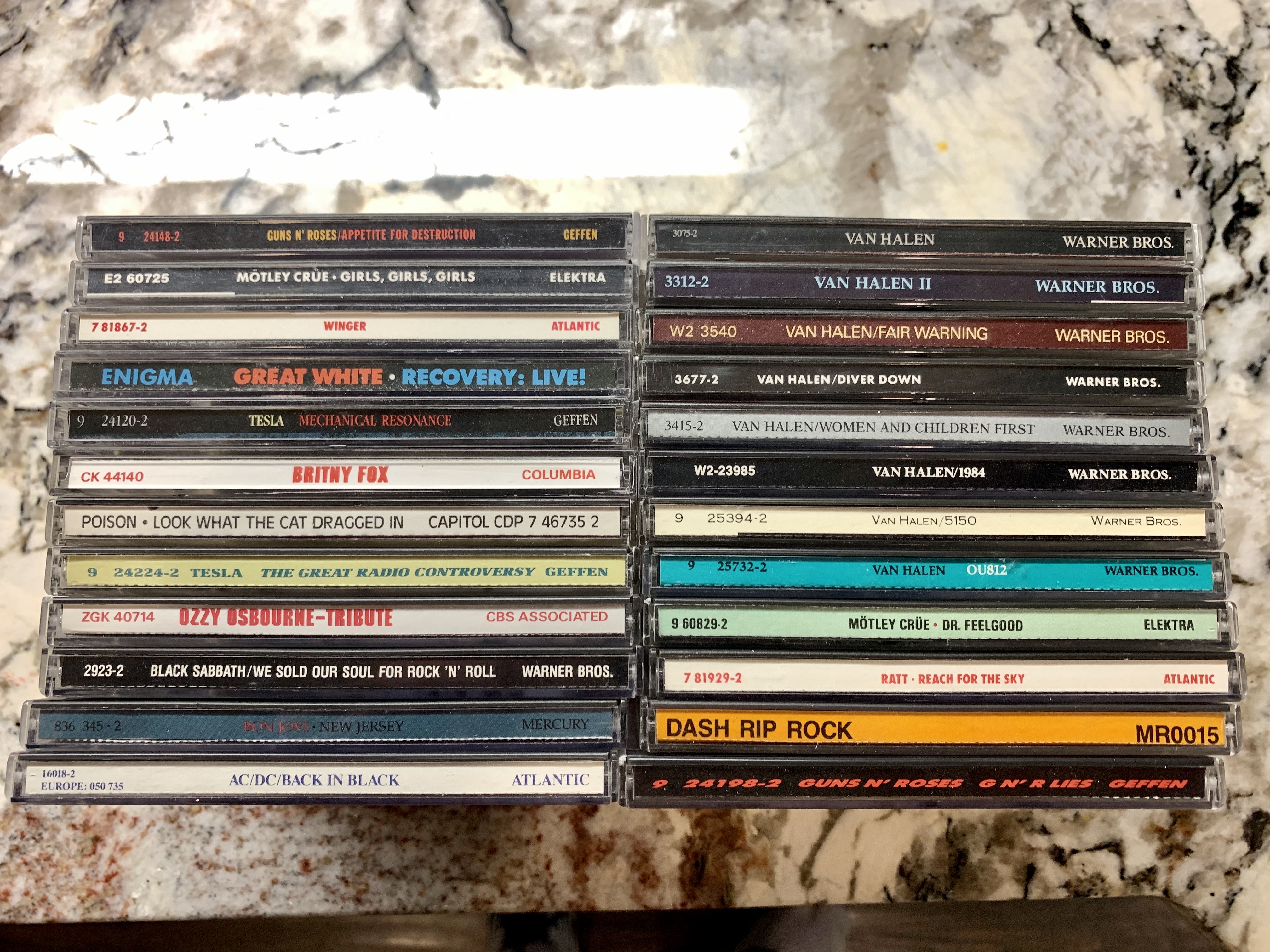 So tonight I’m going down a rabbit hole, thanks to Ozzy, AC/DC, Van Halen—Brett loved Van Halen—and the rest. Memories of that year and half together are strong, as well as memories made after Brett’s death:

Finally, it was at Brett’s funeral that a young lady in the Angel Flight auxiliary (now Silver Wings) first took note of one of the pallbearers. They would meet a couple of times over the next three months, but it was a mutual friend who set them up on their first date for the ROTC Military Ball that April. They have been together ever since. 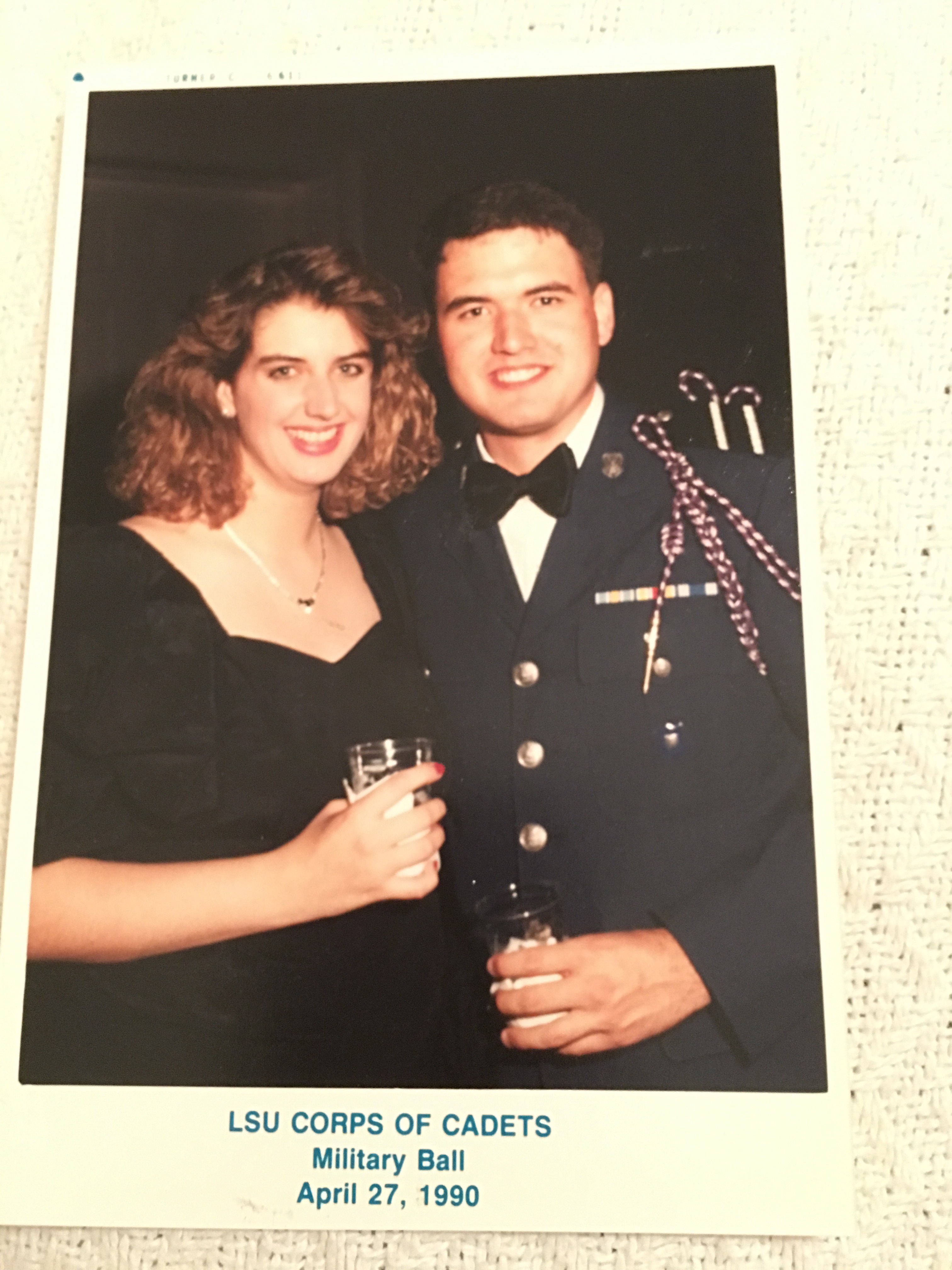 So I will kiss my bride and raise a toast to you, Brett. Rock on, brother. Rock on.

I help administer a private group on Facebook for foster and adoptive dads, and posted this today for encouragement, because I needed it myself:

So lately I’ve been struggling with the strong wills of my boys, and of my own. The constant tug-of-war. My wife and I were talking about it over lunch today, because she shares in the frustration (she’s strong-willed as well), and I reminded her, as much as myself, that they act this way because they feel securely attached to us.

“Well, it would be nice if they weren’t complete JERKS about it!” she sighed. She didn’t use the word “jerks,” but I’m trying to keep this family-friendly.

I mention this because I know I’m not alone in being a dad frustrated with the behaviors of his kids from hard places. Especially when they’ve been in our home for so long (birth for two of them, 9 months old for the third, and they’re 16, 11, and 8 now), and it just doesn’t feel like things are getting better.

Then God decides to plant a reminder on you in an unexpected way. In an email newsletter unrelated to parenting, there was this verse of encouragement from Hebrews, “I will never leave you or forsake you.” God always has our back, and we just need to go to Him with our frustrations, seek His peace.

And because I’m an ’80s metalhead, this verse and the feeling behind it will always be enshrined for me in the opening song from Rage of Angels’ self-titled, 1989, debut album:

My friends Kara and Ryan, who founded and run Imana Kids, posted a photo to the Imana Instagram account with the text of Isaiah 40:8: “The grass withers and the flowers fade, but the word of our God stands forever.”

This verse imprinted on me in a most unique way when I was a teenager. Anyone who knows me knows I was a metalhead in my teen years (and I still am). After I discovered Stryper, and the realm of Christian metal, I came across a Christian rock band called Ruscha. The band was founded by brothers Nikolai and Peter Pankratz, who escaped Communist Russia in the 1970s. They started the band in the 1980s as an outlet for their love of music, and as a vehicle for giving witness to what it was like to be a Christian in Soviet Russia. Andy Denton, whose vocal range is highlighted on the song “Come Home”, was the group’s frontman.

There was a church in one of the Baton Rouge suburbs, Baker or Zachary maybe, I don’t recall which, that hosted the band. (It was the same church I also saw Wayne Watson perform at.) My dad went with me to the event, part concert, part testimony. I’d gotten their album “Come Alive” at a local Christian book store, and loved some of the songs. I can still see in my mind’s eye Andy, Nikolai, and Peter on stage in that church.

There are two things from that album and concert that have stuck with me to this day:

The memories I just shared, stirred up by the Imana Kids post, sent me on an Internet hunt, and the Internet delivered. There’s a Wikipedia entry for the band, linked to earlier in this post. Which led me to wonder if any of their music was available online; the copy of “Come Alive” I have is on cassette, and most likely buried in a shoebox in a closet. We have an Amazon Music Unlimited subscription, and lo and behold! The Pankratzes released a remastered version in 2012, and I’m listening to it as I type this post, with a smile on my face as I sing along to “The grass withers, the flowers fade, Heaven and Earth will pass away, the grass withers, the flowers fade, but the Word of God stands forever.”